CHEC was established based on three emerging trends: The potential for human development and greater societal wellbeing via the appropriate application of technology. The evolution of technological trends from an industrial-paradigm to a human-centric paradigm – emotion, health, entertainment, human engagement, human wisdom. The deep integration of philosophy, psychology, eastern knowledge, neuroscience, economics, sustainability and psychology with technological design and development. CHEC collaborates with KUT internal research laboratories, in the fields of Perception, Cognitive Science, Brain Computing, Psychophysics, Human-Robotic Interaction, and Sensoring Technology. To focus HEC-related issues in a wider community, CHEC collaborates with global researchers including Microsoft Research, Google, The University of Toronto, Aalto University and the Institute of Software, The Chinese Academy of Sciences.

CHEC Collaboration CHEC is positioned as a link between Asia and the Western world. CHEC works in three languages (Japanese, English, Chinese), with students, faculty members and visitors coming from a variety of countries (Japan, China, Australia, Thailand, Korea, India, Myanmar, Indonesia, Iran, Egypt, Finland) adding a great deal of cultural diversity and creativity. CHEC also maintains productive and creative relationships with academic and industrial colleagues on both sides of the general E/W cultural divide. The center serves as a bi-directional portal through which businesses, researchers and institutions can channel their insights and innovations and also receive inspiration from other participants, cultures and disciplines - West to East and East to West. 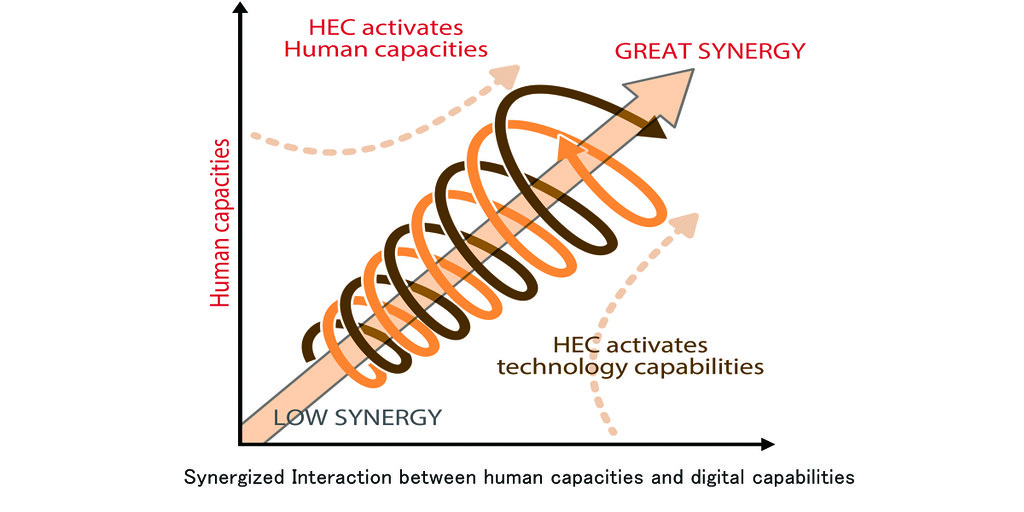 What is HEC? Human-Engaged Computing (HEC) is a study of the synergized interaction between humans and computers, as well as phenomena around the interaction (see Figure 2). It encompasses all aspects of interactions between humans and technologies. Studies in HEC start with an ever deeper understanding of humans, adapting the affordances of technologies to human needs and potentials. HEC drives the evolution of computing with focused emphasis on synergizing the best capacities of humans and computers with a view to enhancing human existence and making a better world for all.

HEC is concerned with interdisciplinary study and knowledge from the following fields:

Vision The CHEC vision is to be a top academic research lab with an emphasis on HEC; to lead national and global HEC research defining future interactions between humans and technologies.

Mission The CHEC mission is to contribute through the HEC approach to make the world better. Our essential ground and focus is humanity, human potentials, human needs and human problems, while technology is considered to hold immense potential to augment humanity via the critical application and creative development of technologies that build humans, respect the environment and make the world a better place for all. We strive to further develop HEC through integrating knowledge from multiple disciplines, leveraging technologies, and understanding and facilitating human engagement.

Environments CHEC provides opportunities to learn about scientific research in a positive working environment that encourages open lines of communication, collaborations with other disciplines including studies on humanity (psychology, sociology, anthropology, culture etc.,) group cohesion, and respect and appreciation for everyone. We strive towards personal and professional excellence in pursuit of scientific knowledge and application.

Research Topics We are interested in HEC-related researches that are concerned with the development of synergized interaction between humans and computers. Three broad research levels can be described: Theoretical study (concepts, models, and theories related to the synergized interaction between humans and computers) Human-oriented study (understanding and enhancement of human capacities) Technology-oriented study (development of engaging technologies)