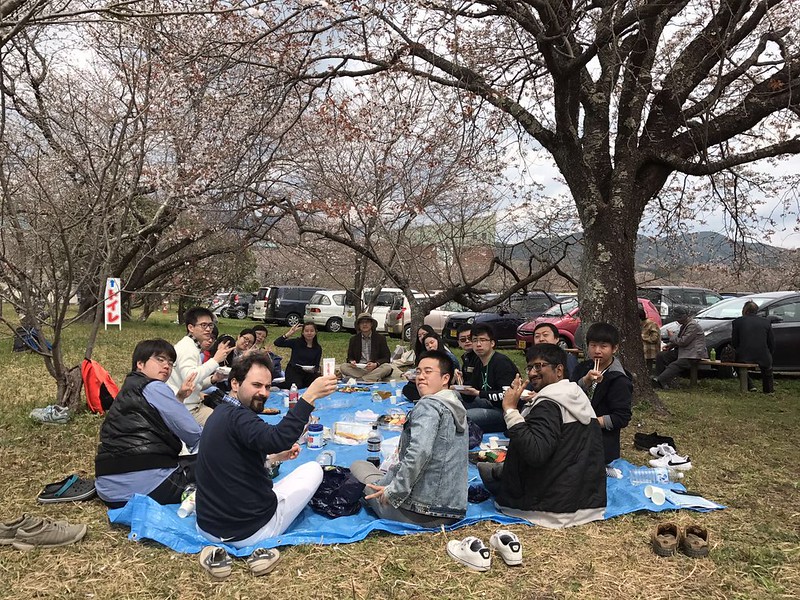 Surrounded by the beautiful blossoming cherry, and with delicious food(Snacks, drinks and Japan classical sushi), I believe everyone had a really good time, also a lovely memory for Japan.

I admire one person for my life and three persons for the subject in which I want to do research forever, i.e, HCI.

HERO for my Life: Swami Vivekananda (12 January 1863 – 4 July 1902), born Narendranath Datta, was an Indian Monk and was a key figure in the introduction of the Indian philosophies of Vedanta and Yoga to the Western world.

Some quotes of him:

"Whatever you think, that you will be.

"To succeed, you must have tremendous perseverance, tremendous will. 'I will drink the ocean', says the persevering soul, 'at my will mountains will crumble up.'

WHY he is my hero?

Hero in the HCI field：When I read the book "The Psychology of Human-Computer Interaction" By Stuart K Card, Thomas P Moran and Allen Newell, I found it really useful to understand the core essence where HCI research stands. This book tells us how to actually perform human-factors research through the processes involved, the techniques to use, and the methods to follow

Archimedes of Syracuse was a Greek mathematician, physicist, engineer, inventor, and astronomer. Although few details of his life are known, he is regarded as one of the leading scientists in classical antiquity. Generally considered the greatest mathematician of antiquity and one of the greatest of all time, Archimedes anticipated modern calculus and analysis by applying concepts of infinitesimals and the method of exhaustion to derive and rigorously prove a range of geometrical theorems, including the area of a circle, the surface area and volume of a sphere, and the area under a parabola.

He said "I have got it!" when he found how to check the crown was made of pure gold or not. The feeling he got is the original instinct that humankind pursue, which pushes mankind and the society go forward.

My academic hero is Thomas Edison. He (February 11, 1847 – October 18, 1931) was an American inventor and businessman, who has been described as America's greatest inventor. He developed many devices that greatly influenced life around the world, including the phonograph, the motion picture camera, and the long-lasting, practical electric light bulb.

Edison has many quotes. One of them is: Many of life's failures are people who did not realize how close they were to success when they gave up.

This is a true story! I experienced it when we climbed to Ishizuchi mountain last year. I climbed over 1870 meters, but can not keep on because I was really exhausted and also hungry:D Later I found that the mountain height was 1,982 meters. Actually, if I know that how I am close to the top I could continue ... I missed wonderful group photo on top of the mountain ...

Also his research about CAPTCHA shocks me.

And the most important reason is that his doctoral thesis is the first paper I read about gamification and I influence me deeply in the following work especially on thinking model.

Myself (don't compare with others, please win yourself; do what you think it is right; [need teacher's right guide]);

My supervisor(I will be a teacher in the future, and I like my supervisor's teaching style[same as Prof.Ren], let his student feel free.)

Imagine getting through your busy day without hands or legs. Picture your life without the ability to walk, care for your basic needs, or even embrace those you love. Without any medical explanation or warning, Nick was born without arms and legs but he has overcome life's challenges always with strength and hope. Since his first speaking engagement at age 19, he traveled around the world, sharing his story with millions, sometimes in stadiums filled to capacity, speaking to a range of diverse groups such as students, teachers, young people, business professionals and church congregations of all sizes. He has accomplished more than most people achieve in a lifetime. He’s an author, musician, actor, and his hobbies include fishing, painting and swimming. Nick says, “If a man without arms and legs to be His hands and feet, then He will certainly use any willing heart!”I know him when I was in high school, my teacher showed us his speech vedio to encourage us. After that when I was facing some difficulties, I will think we should always live with strength, hope and insistant, even a peole like him can do, why I can not. He inspires me a lot.

My hero is my Father.

There are a lot of great story in the world, but I believe in my experience. My father used to be a editor, but he dislike his job. Oneday, he decided to quit his job, and He has had a few years of difficulty. Everyone laughed at him, even me. But finally, he made it. He made me understand that people should not succumb to the fate of the arrangement, but should find their own value.

My hero is Forrest Gump.

Forrest Gump is a simple man with a low I.Q. but good intentions. He is running through childhood with his best and only friend Jenny. His 'mama' teaches him the ways of life and leaves him to choose his destiny. Forrest joins the army for service in Vietnam, finding new friends called Dan and Bubba, he wins medals, creates a famous shrimp fishing fleet, inspires people to jog, starts a ping-pong craze, creates the smiley, writes bumper stickers and songs, donates to people and meets the president several times. However, this is all irrelevant to Forrest who can only think of his childhood sweetheart Jenny Curran, who has messed up her life. Although in the end all he wants to prove is that anyone can love anyone.

Forrest Gump teach me that we should work hard, have hope to the future and never give up. If you do this, Good fortune will follow you.

Hope you to see the film if you read this.

Aphorism: "If you are not a fish, and you never know how it feels."

The second one: Donald Arthur Norman

Aphorism: "Design is really an act of communication."

Influences: The sentence told me that emotion must be bound with one product. A good product should deliver the emotion and values to users.

The hero of my heart is the characters in the animation who is in the One Piece, and she is my favorite figure, Nicole Robin.

When her eyes were laden with tears, she crying to “Lufei”(protagonist in One piece) than “I am willing ”.I know Robin found his own attribution and had the courage to overcome everything. This five months must be unforgettable five months in my life. Hope this span time could get a little longer, so that we can know each other and become a family.

My hero is steve jobs.He has bring a new difference world to our life. He has changed the interaction between human and cellphones.

He said ‘Being the richest man in the cemetery doesn’t matter to me. Going to bed at night saying we have done something wonderful , that’s what matters to me.’

So I think we should find or do some different things in our daily life. Even we don’t have enough power to change the world, we can do our best to change ourselves.

I appreciate Steve Jobs better.He was successful in the user experience field.And he said,Your work is going to fill a large part of your life, and the only way to be truly satisfied is to do what you believe is great work. And the only way to do great work is to love what you do. If you haven't found it yet, keep looking. Don't settle.Yes,Everyone is unique.Don't living somebody else's life.

My hero is Steve Jobs.

Yeah, I know maybe sounds a little bit corny, cause too many people worship him cause his talent and passion for the product.

But I admire him for his taste.

Once a time, a journalist asked Jobs why Apple’s product so diffident from Microsoft’s , and why Apple’s stuff have so many interesting features

Jobs thought about it, and answered ”Everything is about taste.”, he also admit Bill Gates is a genius, but he don’t have any sense of “taste”. And that just explain why Microsoft’s stuff so boring.(Don’t get me wrong, I also worship Microsoft’s Engineering)

My hero is Mencius, whenever I am in the work or learning difficulties encountered to give up, I will think of Mencius that sentence: God will give great works to any persons also must suffer their minds, Hungry their skin, so tempted to endure, the gain can not. In addition, born in fear of death at the moment of vigilance I have a sense of crisis, the world will not because of your presence or not different.

From where I stand, FU Lei is my hero. I knew him when i was a primary school student. Especially I can feel the love from FU Lei.This book is mainly Fu Lei in the letter to tell his children how to behave, how to engage in art, and how to deal with life and other issues. He taught his son to be a modest and prudent person, to do a "moral and artistic, outstanding personality of the artist." In life, Fu Lei also is a positive guide to his son. FU Lei book to the cause of life art, small about paying money, unavoidably, all careless. And he dared to analyze himself, in front of their children to admit mistakes, from their own experience and experience, he is the son of mentor undoubtedly.I remembered one sentence from FU Lei book, "A person's service to the people do not have to stand in the General Assembly to speak or do what kind of great achievements, share what you know even a little anytime and anywhere, virtually for the country sowing, fertilization, reclamation". It seems easy, but most of the people always ignore.