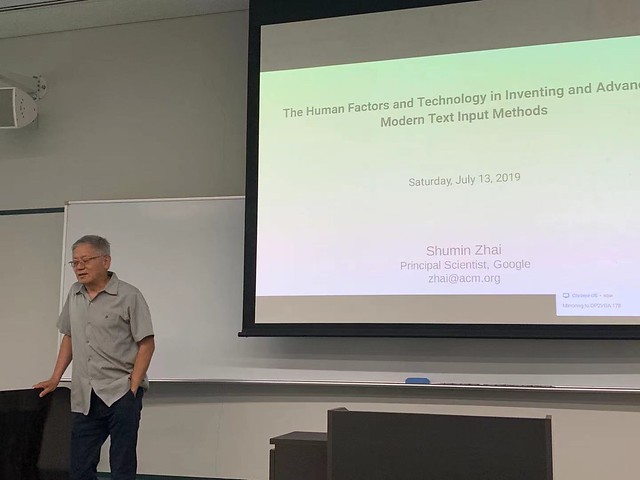 Futurists and science fiction writers predict and write about the future. Researchers and technologies bet their career on what is likely to be “The Next Big Thing”. In the end most of these predictions and bets are no better than the average opinions of the industry and society at large. I will share my personal experiences in choosing and pursuing research projects, ranging from 3D interfaces, VR, AR, and telerobotics, computer input devices and interaction methods, human performance modelling and mobile and smart text writing innovations. I will reflect on the successes, failures, and challenges, as well as the varied context surrounding some of the projects: time and era, academia vs. industry vs. start-up, and different cultures: silicon valley, east coast North America, Asia and Europe.

Shumin Zhai is a Principal Scientist at Google where he leads and directs research, design, and development of input systems, interaction methods, and mobile haptics. His past research career has contributed to theoretical models and understandings of human-computer interaction as well as broadly deployed practical user interface designs and product innovations. He originated and led the SHARK/ShapeWriter project at IBM Research and a start-up company that pioneered the swiping word-gesture keyboard paradigm. His academic publications have won the ACM UIST Lasting Impact Award and a IEEE Computer Society Best Paper Award, among others. He served as the 4th Editor-in-Chief of ACM Transactions on Computer-Human Interaction. He received his Ph.D. degree at the University of Toronto in 1995. In 2006, he was selected as one of ACM's inaugural class of Distinguished Scientists. In 2010 he was named Member of the CHI Academy and a Fellow of the ACM.